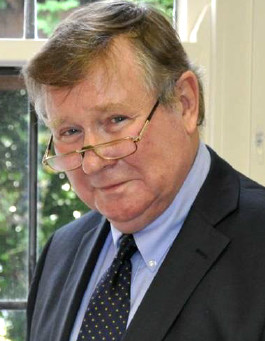 The organizers of the Halifax 2018 Conjugate Margins Conference are delighted Dalhousie University has chosen to recognize the accomplishments of Dr. John F. Dewey with the awarding of an honorary doctoral degree for his important contributions to earth science, teaching and mentorship to generations of students, and unselfish collaboration with colleagues and associates around the world.

On the morning of Monday, August 20, Dr. Dewey will be awarded his honorary degree by Dr. Richard Florizone, President of Dalhousie University. This will be followed by his conference plenary address .

In celebration of the 200th Anniversary of Dalhousie University, the University honours individuals at celebratory events outside its scheduled convocations. The biennial international Conjugate Margins Conference series draws academic, industry, and government scientists from around the world to share research and discuss the geoscience of the Atlantic margins.

Professor John F. Dewey has made outstanding contributions to geoscience through changing the perception of earth scientists studying the continents that form the Earth. His scientific leadership provided a clearer understanding of the tectonic evolution of the sedimentary basins along the Atlantic margins.

Professor Dewey is a most worthy recipient of an honorary degree from Dalhousie University based on his extraordinary achievements as a geologist. John Dewey received his Bachelor of Science with First Class Honours from Queen Mary College in 1958 and his Ph.D. from Imperial College in 1960 studying the geology of Western Ireland. He spent many days in the field and credits the study of rocks at outcrop to providing him with the skills to develop concepts of global tectonics.

His CV lists many awards and accolades, and I will list a few. The Wollaston Medal is the highest award of the Geological Society of London, and awarded to geologists who have had a significant influence through a substantial body of excellent research in either or both ‘pure’ and ‘applied’ aspects of the science. The Society’s Lyell Medal is the scientific medal awarded to those who have made a significant contribution to the science by means of a substantial body of research. The Geological Society of America’s Penrose Medal is awarded in recognition of eminent research in pure geology, for outstanding original contributions, or achievements that mark a major advance in the science of geology.

Professor Dewey is a member of the Royal Society of London and the US National Academy of Sciences. Previously, he has been awarded honorary degrees from Memorial University of Newfoundland and the National University of Ireland.

It gives me great pleasure to award Professor John Dewey an honorary degree from Dalhousie University, and in recognition of Dalhousie’s 200th Anniversary.